That was our final advice in a workshop we hosted with Inspinazie during the Applied Improvisation Netwerk conference in Berlin in 2014, about the use of applied improvisation, both in show-formats and training-formats.

When I heard this, I felt both resistance and relief. Resistance because it’s definetly not a domain I would want to focus on if it turns away from the arts. Relief because it’s also good if distinctions are made, and a better mutual understanding can be reached if the vocabulaire in our young work domain is getting refined. Which I personaly think is needed, because the flag of appplied improvisation is covering so much that it might still be very blurry for (potential) clients. Why not help them to see more of the different tastes that exist in this world – give those different tastes their place – and let them decide what fits best for them. As an example, in Belgium we have a network developing where we clearly go for “the use of improvisation theatre for organisations, with always aiming impact on both individuals and the system”.

I’d love to hear more people share their thoughts and feelings on this. Here are some of mine, how I see it, here & now.

I don’t know if improvisation “an sich” is much more than an adjective.
It’s a way of doing things or part of things. But on itself, it does not have so much “body”. It’s not like mathematics or fysics, where you have the theory and then the applications. I don’t know if there’s actually such thing as general applied improvisation. Maybe in improvisation, one application can be inspired by the other, that’s all. As far as I know, when improvisation is theorized, that is always starting from examples, from very concrete realities, from existing applications of improvisation (in arts, in nature). So we can get to some principles ( great example of someone who listed core principles of improvisation, is Patricia Ryan Madson in “Improv Wisdom – Don’t prepare, just show up.”), but I wonder if we can get to clearly shared definitions and unambiguous rules? I guess not. Which is fine since improvisation and ambiguity go along very well :-). It might also be the the reason why “Fuck the Rules” is a -sometimes blindly followed – popular rule among (theatre) improvisers.
Maybe the reason for that is that improvisation is, like zen buddhism, a path – not something you can achieve.

So, an action can follow the improvised path, as opposed to planned, controlled, scripted. With a big difference in the process and the outcome though depending on if improvising is a concious and positive choice.. And that is where the work lies I think.

The beauty and the strenght of improvisation does not come from when or where you improvise, but from why.
When you find yourself improvising in life try these questions.
Is it because you’re lazy? Because of the poor communication? Because you don’t realy love what you’re doing in that moment? Because you think you have to be faster?
Or..
Is it because you’re so alert and fearless that you’re open to what emerges as other, better or new possibilities? Is it because you’re so curious in what some one else brings in that you’re ok to let go your own idea? Is it because you’re so connected that you start to experience (not only understanding) what synergy is?
In case of the last examples, if you want to develop these intentions (or learn how to deblock what hold you back from it), you’ll need to overcome fear, to get in touch with what you feel, to get connected to your environment.
Where can you find better exercises than in the improvisational performing arts to work on this?
In my personal opinion, turning away from improvisational arts to train improvisation qualities, can even have a contraproductive effect. Especially when it comes to relational topics between people and teams in organisations.  Ofcourse when applied to work and life we should not focus on all the acting skills. But I think there’s a tendency in the work to become very cerebral by avoiding those and miss a lot of strong stuff.
I heard sometimes that applied improvisation used in companies should be safe. Why is that? Is it so frightening to have people use their bodies, their voices, their feelings? Ofcourse we should create an atmosphere where people feel ok to engage in these exercises. We can build an atmosphere of trust and playfulness (one can definetely trigger the other in BOTH ways) instead of changing exercises to make them “safer”.
This same caution happens all the time in Improvisation Theatre itself by the way. We’re definitly not the only company that at some point in our history got questioned by Keith Johnstone on a change we made to one of his formats because we found it too uncomfortable for the players, while the aim of that specific element was to turn discomfort into playfulness.
I love how Patti Stiles often puts this: will we continue to build more walls of protection or will we learn how to let the fear go?
Just yesterday, Arthur Aalbers shared a great blog about the loss of courage on stage (in Dutch).

Yes and.. shut up.
Improvisation impacts many levels of our behaviour. Because it is not only a mindset (let go, re-define, connect the dots). It is also a heart-set (connect yourself, feel) and a body-set (sense, act). I think if we only chose the verbal, abstract, cognitive exercises, we don’t cover the last two and might even block the way to go there. Excessive “Yes-and training” is a good example for that. Yes-anding forces us into our heads and I often see people Yes-anding so quickly that there’s no space for others or not for their own second thought. Who said improvisation is about the first idea? If that first idea is just a habit or one from your ego protecting itself by being witty, I’d rather want to know about the next idea. While performing improvisational arts, you learn to enter that exciting empty space where so much fresh things can happen.
So let’s learn how to hold that space.

“Holding the space” is a description often used in Theory U, when talking about the state of “presencing”: where people (individuals, teams, organisations,…) are able to let go (old ideas, powergames, ego, habbits,…) in order to let come (new possibilities, new realities that emerge).
In one of his talks about presencing, Otto Scharmer puts: “We can learn a lot here from performing arts, and especially from the improvised ones.”

I definitely feel like continuing to inspire people in work & life through improvisational performing arts. 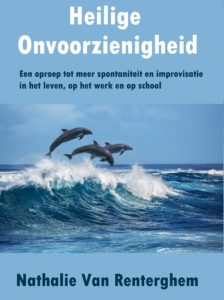